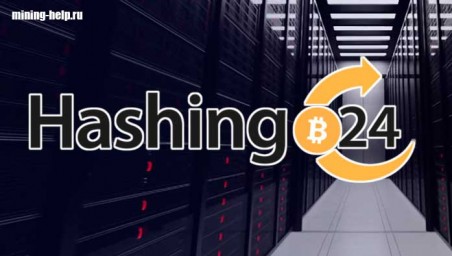 After the appearance of bitcoin in 2008 and the rapid growth of its rate in the following years, the mining of cryptocurrencies became extremely profitable. However, mining with high productivity requires entire farms of expensive equipment. Not everyone is ready to immediately invest such amounts in mining, and it is not easy to maintain a cryptocurrency farm. Therefore, cloud mining was invented: an entire company creates and maintains a farm for mining cryptocurrency, and investors rent its capacity for a fee. As it turned out, this method of mining is even more profitable, because the equipment for the farm is bought by the company in bulk, and it is located in areas with a low cost of electricity.
Hashing24 stands out among cloud mining services. It will be discussed in detail in this article.

Platform Hashing24 was opened in 2012 and is used for cloud mining of bitcoin. Despite the prestige and popularity of the company in the circles of miners, Hashing24 does not try to produce its own products for farms, but openly declares the use of BitFury equipment for the most part. And this is its main advantage, because BitFury products occupy a leading position in terms of performance among mining systems around the world.Another advantage of Hashing24 is the location of farms in Georgia and Iceland, countries with low cost of renewable energy. In addition, Iceland has a cold climate, so the cooling of mining equipment can occur naturally.
The use of high-efficiency equipment and location in places with cheap electricity resulted in a third advantage for Hashing24. For the same price, this cloud mining service offers more capacity than other companies that incur more losses in the process of servicing farms.

Registration in the Hashing24 online service takes place in a few clicks and does not require a high level of computer skills, and the minimum threshold for purchasing capacity allows even a beginner with a small capital to make a profit. For greater reliability, deals with insurance payments in the event of emergencies are available. The service itself is translated into 8 languages, including Russian.
The account in the service is replenished by means of MasterCard and Visa bank cards, OKPay or non-cash bank transfer. Funds are accepted in dollars, euros, and bitcoin. In the service itself and when withdrawing from it, only bitcoin is used, which helps to avoid losses due to an accidental change in the exchange rate.
The withdrawal is made with a minimum amount of 0.002 BTC, and the permanent commission for the transfer is 0.001 BTC. Therefore, it is more profitable to withdraw large amounts after a long accumulation, or at first spend the profit on additional capacity purchases.
Technical support of the service works around the clock. If you have any questions or problems, you can contact the service either on the website itself or via email.

< h2>Registration on the Hashing24 service

As mentioned earlier, it is very easy to register on Hashing24. To do this:

and select the appropriate interface language in the upper right corner;< / li>