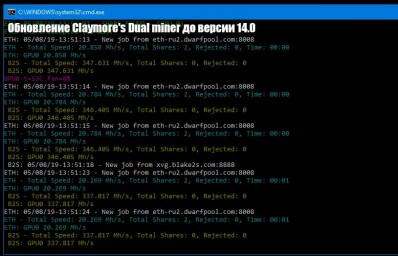 < p>Claymore’s Ethereum mining software is in demand among users. It is convenient, multifunctional and versatile. The software runs smoothly. Since it was difficult to offer something new in the direction of the development of Ethereum, updates to Claymore’s Dual Ethereum AMD+NVIDIA GPU Miner were rare. Version 12 was released in September 2018. It featured a minimal commission and the ability to support Cuda 10. Then the developer released version 14. It allows owners of the AMD video card to change its operation parameters using the unique command-strap. There is no need to perform work on changing the BIOS (firmware) of video cards, in turn.

< p>For Linux and Windows, a program with similar AMD Memory Tweak Tool options was previously developed. It was required to run simultaneously with the miner. Due to the fact that the Claymore’s Dual Ethereum GPU Miner v14.0 update has the-strap command, changing the memory frequency and timings is quite simple.

Features of the -strap

commandYou can select the memory parameters automatically by entering a number from 1 to 10 for the-strap parameter. The number 1 indicates the maximum possible overclocking of the memory of the video card. In case of its hanging or unstable operation, the-strap parameter is reduced to 2, etc. For each video card, you can run it separately.

Using-strap, the user can specify the manufacturer, the frequency of operation, the volume of the video card.

Now the beta version is suitable for Windows OS and Polaris graphics cards (models RX 4X0-RX 5X0). In the near future, the developer plans to release a version that will support most AMD video cards, Linux OS.

After the release of the full version, the tuning of video cards by editing the BIOS will no longer be relevant.Claymore’s Dual Ethereum AMD+NVIDIA GPU Miner is the perfect opportunity to perform all the necessary manipulations without putting any serious effort. This update allows each user to simply and completely safely increase the performance of the AMD graphics card in mining.