Where did the video cards disappear from the 2018 sale? 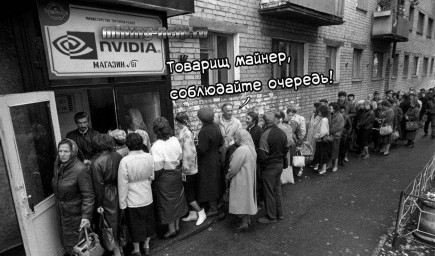 Where did the video cards disappear from the 2018 sale? It was already the summer of 2017, and history repeated itself!

Since the courses have grown a lot, even despite the rollback, the income from them is still good. And again, the cards have disappeared from the shelves, and even if you found them, they are very expensive! Miners, or those who want to start mining, grab everything in a row!

Of course, this is not good, people do not delve into the subtleties of mining (some do not even know how to insert a video card into the motherboard)< / strong> chasing freebies! Of course, with our salaries. And we have such a mentality, he likes freebies.

This situation was already observed in the early summer of 2017, the cards also disappeared! Then the manufacturers type “solved this problem”.

They came up with the mining edition cards. But they didn’t go, I’ll tell you why.

1. They were without video outputs, or with one-and how will the miner then sell them? (for gamers)

3. They are no different in terms of cooling and mining speed

4. And for all that, at the same time, they have the same price as the usual ones!

And why are they so necessary? At least they were cheaper, maybe then they would have been used.

< p> Sorry for the gamers in this situation. After all, the cards were originally needed for games.

Now they have come up with new “measures”.

Now NVIDIA has said it is asking retailers to make a ban. Or rather, sell no more than 1 card per day, in one hand. But I’m sure the stores don’t need it. And even if this happens, the Chinese will come up with their own video chips for mining! Or there will be an underground!

They also say that gamers are their priority, how beautifully they lie.

Let’s remember the cards that were before the 1000 series. They were very bad at mining and outperformed AMD in games, but everyone bought AMD. And amd’s sales were much higher because of mining. And then, purely by chance, the 1000 series comes out, which is very good for mining, and in some cases surpasses AMD. By accident? No, I don’t think so.

So card manufacturers benefit from this.

We are waiting for new episodes, I think they will be better to mine! Don’t you agree? write comments!

Thank you all, bye!