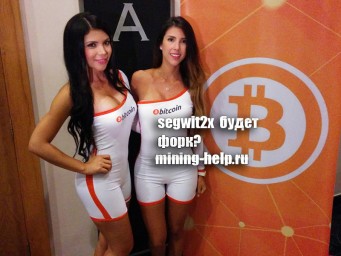 Many popular blogs have already written about the segwit2x hard fork, but everything is like a carbon copy. And so let’s analyze it in simple language. And we will express the point of view of our community.

And so the segwit2x bitcoin fork was supposed to be in November, but it was canceled. And now they said about its renewal, like the network of the original bitcoin has become bad, large commissions and they want to fix everything. Is everything as beautiful as they write? And what is most interesting as it is written in the news, segwit2x will be mined on the x11 algorithm (on which dash is mined). This turns out to be another bitcoin gold only from segwit2x. In general, it is not completely clear. My opinion is that it still will not be as popular as the developers say.

The only thing is that this fork was supported by many key players in the bitcoin market (exchanges, communities). But then they refused. But would they hold her now? Will they support you financially to bring it to the market with a good price? There is no clear answer to this question anywhere.

The segwit2x fork will take place at block 501451, which will approximately happen on December 28. They say a gift to us. I don’t think we need it. These forks are already boring. But they promise in addition that you will be able to get 1 to 1 coins, as is the case with bitcoin cash and bitcoin gold. You will also get the quote “the proportional number of coins that Satoshi Nakomoto himself minted in the first year”. Here again it is not clear, 980.000 coins each will receive? Nonsense.

Let’s go back to the mining algorithm, as I said, they write that it will be on x11. I wonder if it’s a coincidence that dash has increased in price so much?

As the developers promise, it will be almost a replacement for bitcoin. But he also promised us a goal. They write beautifully, but in fact what will happen-we will find out later. I think it will be another BTG or BCC. These forks are already boring.

Thank you all, share your opinion about segwit2x in the comments. It is also possible to write articles soon how to get segwit2x, and mining segwit2x.< / p>