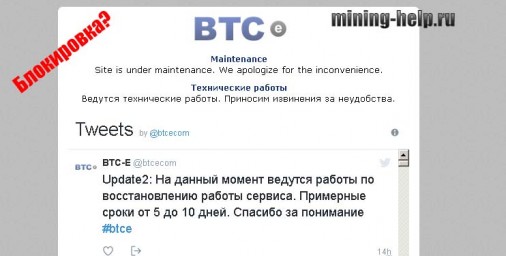 Greetings, sad belated news of 2017, even for those who do not use this exchange. On one good day, users including the computer noticed that the btc e exchange was not working. And this has been going on for a very long time. Only btc e twitter works in which only promises are made.

Let’s take a brief but detailed look in order. At first, naturally, various rumors went, the first naturally that it was hacked by hackers, even some addresses were given by the left. The second thing is that it’s just a scam, the owners stole the money. And the third thing is that with this news, there was another news that an attacker was arrested in Greece who laundered $ 4 billion through bitcoin, everyone began to assume that this was the administrator of this exchange.

And in the end, why is btc e not available? As a result, as the news showed, the one who was detained in Greece on a US warrant was one of the owners of the exchange, his further fate is not yet known. As I wrote that we will also have problems from btc e, why? Because in any case, the bitcoin exchange rate will fall because of this, therefore, the other cryptocurrency will also fall.

Some providers in Russia, and for example in the Yandex browser, the site does not open at all. It was marked there as not secure, it feels like btc e is lying, but there is such a problem even their Twitter on the main page is not visible, either a direct access to their Twitter or a proxy that they want to ban in Russia will help you.

So why does btc e not work the result and its further fate.

In general, they promise on Twitter that they will do everything, first they wrote that soon, then they write 5-10 days, but we in Russia know the saying, ” they are waiting for the promised 3 years.” There are many rumors about what will happen to her next. But let’s think logically, one founder is at large, the second was detained, why did they close the exchange? Perhaps they will also arrest the money that he laundered or have already seized it? They also understand that after the opening, a lot of people will dump. But someone will remain and the profit will still be, in general, you can not guess exactly here, the fact is that if one of the admins is closed, the exchange can not “break” what will happen next will earn or get bored? Here 50% on 50%, it remains only to wait. What to do while the exchange is not working or where to go next, I recommend several exchanges.

EXMO is a very convenient exchange, the only disadvantage is that there are few currency pairs

Cryptopia – a lot of crypto currencies and currency pairs, but a little awkward interface

HitBTC – something in between.

Thank
you all for your attention, bye.

I
advise you to look at:

Help for the site.

How to withdraw from EXMO.