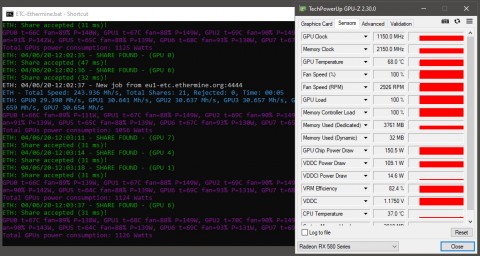 Miners using the AMD Radeon RX 4xx / 5xx GPU to mine Windows ETC in the near future may start to get weirdly poor performance on the first video card in Riga, while the rest of the GPUs will work as usual. The reason for this is quite simple, although we are still quite far from 4 GB of DAG file size, because in the current 337 ETC era a 3.63 GB DAG file is required (for the miner from Claymore), the first GPU in the system uses more video memory, since it needs display the operating system interface. As a result, when using Windows, the first GPU consumes approximately 140-150 MB of additional video memory. Therefore, the actually used memory is approaching the maximum size of 4GB. As a result, instead of 20-30 MH / s, you can start receiving 1-2 MH / s for the first video card in the system, and soon it may even stop showing any hashrate at all.

Typically, the remaining GPUs in the system should load 3745 MB of video memory in accordance with the data from the GPU-Z during ETC mining, while the first GPU will consume about 3890 MB, and after some time this number can increase quite a lot. Obviously, this problem will not affect models with 8 GB of video memory in the near future, and only GPUs with a video memory size of 4 GB will be affected by it.

So, what can be done if you encounter a similar problem, and you can’t switch to Linux for one reason or another. If your central processor has a built-in video core, and your motherboard can correctly use it together with 6-8 GPUs, you can turn it on and configure it as the main graphic processor that will display the image on the monitor. This solution will allow you to postpone the problem with ETC mining on 4 GB video cards for some time, at least until the size of the DAG file exceeds this limit. In addition, transferring Riga to one of the available Linux distributions created specifically for mining, for example, HiveOs or RaveOs. This is because Linux (especially without a graphical interface) consumes less resources than Windows.

At the moment, Ethereum Classic (ETC) is still ahead of Ethereum (ETH) by 10 DAG eras, so in the near future, those who mine Ethereum on video cards with 4 GB of memory will have the same problem. It is worth mentioning here that recently Bitmain released an updated firmware for its Ethash ASIC miner Antminer E3, which freed up a bit more memory for the algorithm to work and thus extended the operation of its device for another couple of months. On board Antminer E3 is also located 4 GB of memory. 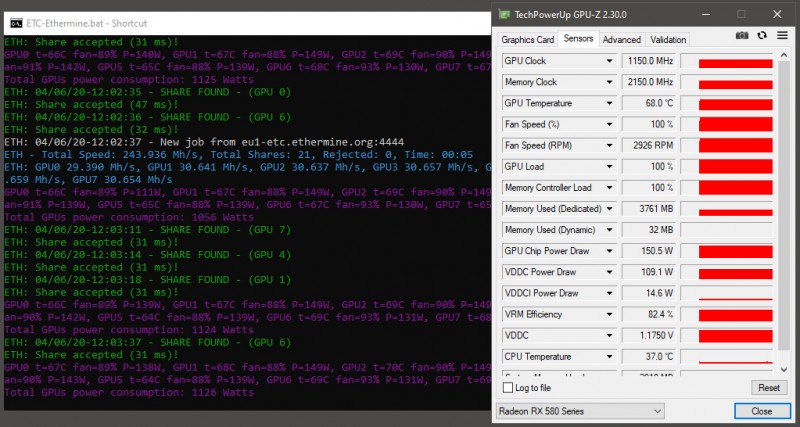