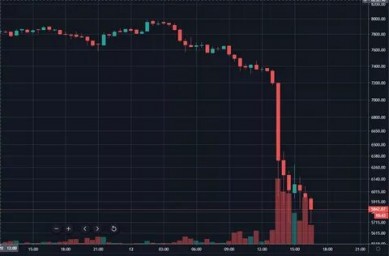 The last day will take its place in the history of the cryptocurrency market as “black Thursday”, smoothly flowing into “black Friday”. A day ago, bitcoin was trading above the support of $7,500, but soon market participants saw completely different figures.

The huge sell-off was influenced by the situation in traditional markets. US indexes fell almost 10%, and this was the record fall since 1987.

SHOCK ON WALL STREET: The Dow closed down 2,352 points – its worst percentage drop since 1987, and its worst point drop EVER – CNBC

The Fed’s statement on measures to support the financial system (i.e., the injection of new money into the economy) was only enough for a small attempt to rebound the S&P 500, after which the index continued to fall. Asian indices followed the same path, showing a drop of 8-10%. Even gold is falling, and the price has dropped from $1,640 to $1,559 per day.

The crypto market returned to the values of March 2019. What to expect next, if bitcoin falls along with the stock market, where the collapse is just beginning? As practice has shown, bitcoin showed an inverse correlation with the S&P 500 with minor drops caused by local problems.

When the stock market is not a correction or a small decline, but a collapse within a few weeks, bitcoin falls along with the stock market and even overtakes it due to its small capitalization.

This is the first global crisis in the history of bitcoin. For the first time, we will see how bitcoin behaves in such conditions.

Obviously, investors perceive it as a venture asset, and sell it when problems occur. The decline of bitcoin to the levels of the beginning of 2019 provokes panic and a massive drain, which makes everyone even more afraid and the collapse continues.

What do I personally do?

First< / strong>, I do not sell bitcoin at such prices. Everyone should understand that bitcoin, which often gives super-returns, is not a deposit in Sberbank, but a high-risk asset. In such assets, you can only invest the amount that the loss of which will not affect your standard of living.

Any crisis is a temporary phenomenon, followed by recovery. Bitcoin is scarce, its growth in the medium term is inevitable.

Many people regretted that they did not buy bitcoin for $3,200 in 2018. Now there is an opportunity to fix everything. And I’m looking at it.

Secondly, I do not recommend buying altcoins. They have no bottom. I consider only ETH and BNB for a small part of the portfolio.

When is the growth?

No crisis lasts forever, and any panic and fear also has a beginning and an end.

In the medium term, the prospects for bitcoin are even better, because the main anti-crisis measure that central banks are using now is the injection of new money into the economy. And this is inflation and the depreciation of fiat.

Remember that a crisis is an opportunity.

* What the star implies: Links marked with a * mean that we will receive a commission if a booking or a specific action is made via the linked provider. There will be no additional costs for you. Also, we won't receive any money just by setting links.
Share:
0
Author: Admin
13 March at 13:05
Rate the article on a 5-point scale
Your rating will be first
Leave a comment (0)