Obelisk is preparing to release new ASICs for the Cuckatoo31 algorithm 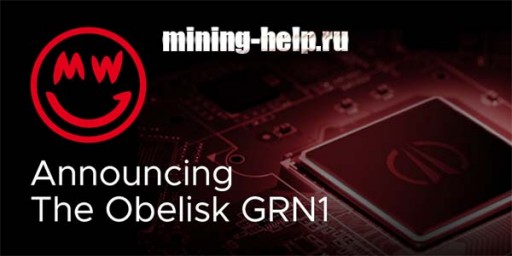 < p>Obelisk has announced a new generation mining system called Obelisk GRN1. It is focused on the POW algorithm, namely Cuckatoo31. The GRN1 devices have improved not only the chips, but also the control boards, hash boards, and mechanical design. The manufacturer even tightened the power supply.

The developers of Grin previously reported that they intend to encourage the creators of ASIC, sharpened under Cuckatoo31+. As a result, the team provided Obelisk with a program code that defines the specification of their mining algorithms.

In hardware development, the most difficult thing is the lack of flexibility. Those who create mining equipment have to agree on each specification for a long time. Because of this, even minor changes in the equipment lead to the fact that its release is delayed for months.

Chips are the most expensive in ASIC. They are responsible for calculating hashes. Most of these devices contain a lot of small chips that emit a lot of heat. Large chips are partially devoid of this drawback. In addition, they are characterized by low energy consumption. But at the same time, their production is more expensive.

< p>Obelisk decided to make its ASICs as productive as possible, but cold. The company has equipped the equipment with a large number of chips of significant size. Also, the new ASICS can boast of a large amount of memory.

This means that the equipment will be expensive. But it is planned to compensate for this with low energy consumption.

For comparison. The last Obelisk ASIC model S9 released included approximately 3,500 square millimeters of silicon. It is planned that the area in the new ASICs will increase threefold – up to 10 thousand mm2.

The developers expect that the power of each ASIC will be 100 Gps at a consumption of 800 Watts per hour.

According to the plans, the Obelisk will be a 2-phase sale. The first is the implementation of vouchers, the cost of each of which is $3000. For 1 voucher, you can purchase 1 ASIC. This phase will last from January 17 to February 1. The number of vouchers is 10000.

The second phase is direct sales of equipment. The cost of each unit will be 2 times higher – $6000.

Interesting fact. Obelisk will deduct $100 from each voucher sold for Grin development. In the second phase, this amount will be $500.