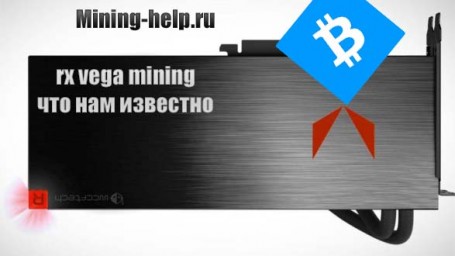 Soon, the new Amd radeon rx vega video cards will officially go on sale on August 14. What we know.

Not much is known, while they say that the radeon vega frontier edition will give 39 mh/s on the air. But according to other data from an AMD representative, vega will give from 60-70mh/s to 100 mh/s on the air. That at the recommended price of $ 600 – $ 700 will be very profitable for miners. But we also need to find out its energy consumption, then count the profit. But if the power consumption is small – then it is deplorable for gamers (miners will buy everything), although for miners, because then the complexity of mining will soar. And old video cards will be less useful. Well, maybe they will at least become cheaper then.

Amd radeon rx vega 64 frontier edition 16gb mining-what is currently available and what is the hashrate.

So far, this is the data. And if the information about 60-100 mh/s is confirmed and DCR is launched in the dual, then there will be a very high profit. But the complexity will also grow.

Well, what to guess, we are waiting for the middle of August and we will find out everything.

I also advise you to read – & nbsp;How to mine bitkion.

Want to help – Help for the site.